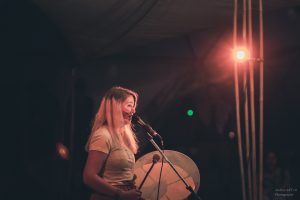 Mané is a young pop singer/songwriter from Lausanne, Switzerland. Her latest single “Pullover Jaune” was released in January 2020 and she is preparing an EP for 2022. Her pop/electronic music is inspired by artists such as Halsey, Angèle or Eivør. After a tour in the USA (Hotel Café in L.A, The Commodore in Nashville, etc) and in Europe in 2016/2017 (Paris, Berlin, Amsterdam, Threshold Festival Liverpool), the singer released her first EP “Before The Storm”, at the end of 2017. “Before The Storm” was produced between Paris and London by SashaF, as well as Yaacov Salah and Meïr Salah from Meya Music (Slimane, Marina Kaye, Florent Pagny). Mané has had the support of several Swiss radios such as Option Musique, LFM, Radio Chablais, ONE FM, Rhône FM, RNV, 7 Radio, RTN. “Before The Storm” was included on playlists on Rhône FM, RNV, 7 Radio, Radio Swiss Pop and Radio Cité Genève. The track was also selected in the Top 15 finalists for the Demotape Clinic (Pop Category) of M4Music Festival (Zürich, CH). In 2018, Mané was chosen by Swiss supermarket COOP to be the lead singer for their Christmas TV Ad, with the song “Un Moment”. The track was integrated on Option Musique’s playlist (one of Switzerland’s biggest radio channel). Mané was invited by RTS (National Swiss Radio & TV) to perform at the Swiss charity event “Coeur à Coeur “, in Lausanne. In 2019, Mané performed at La Parenthèse (Nyon, Switzerland) and L’Esprit Frappeur (Lutry, CH), with a set of brand new pop/electronic songs. In 2020, Mané started integrating shamanic sounds and oriental elements to her music, accompanying herself with a shamanic drum on stage, and mixing it to her pop sound. With Armenian and Iraqi origins on her mother side, she intuitively started to explore oriental ranges in her voice and her music. She performed the traditional Armenian song « Dle Yaman » on stage and felt inspired to connect more to her roots. The history of her ancestors, travelling to other countries, or fleeing the genocide, deeply touches her. As a child, Mané used to listen to the stories told by her grand-mother about her family. It was an honor for her to be asked by Adrian Kessler to write a song in Armenian. She was first inspired to write the full poem « Que la lune soit avec toi », then transforming it into the piece of music of the same title. Written in French originally, it was translated by Vahan Mkhitaryan. The music was arranged and performed by Jean-Valdo Galland.