Keeni Kessler, a Dutch born Canadian artist, studied at art academies in the UK, Germany and Italy, where she spent the war years (unable to leave due to the conflagration which started in 1939 in Eastern Europe and later in Western Europe) and thus spent much more time than originally planned in Italy, in Tuscany more precisely. She was studying in Florence at an Art Academy and privately under the sculptor Bramanti. (1939-1940). Keeni sculpted the self-portrait in 1939-40 in Florence. In her eyes, Florence made it possible for her to express herself in an intense way, (“becoming Fiorentina”) thus the sculpture is the culmination of that feeling and capability. During that time, she also drew and made a number of water colours of the local scenery and countryside, but most of all drew charcoal portraits which was her main focus. (both types almost all lost) Florence made her: from a shy and insecure young girl, she became a young woman, much more assured and willing to show her abilities without fear of being ridiculed, as she felt it so often happened in Holland.

The forced stay made her integrate completely, as she quickly learned to speak like a native Florentine or “Fiorentina” as the local dialect had no secrets for her, and even though of Northern complexion (blond and blue-eyed) she was almost always taken for a Venetian, which she took as a great compliment! She adopted Florence as her “native country/paese” and even though times were extremely difficult given the war, she met wonderful people that helped her, some indeed saved her life. (she was an “enemy” given her Dutch nationality and had to live in hiding after 1943). She worked for the Allies in Rome at the end of the war until 1947. (The South Africans and the New Zealanders – designing cemeteries for the fallen Allies). In 1948 she emigrated to Canada with her husband.

Her love of Italy also translated into its cuisine (she was an excellent cook) and after the war took her family on holidays for over 10 years on a yearly basis to her friends, mainly in Florence and favourite haunts. (Florence, Rome, Naples and the Amalfi coast, Positano, Praiano, Elba island and Porto Santo Stefano).

Her collage art, which she undertook much later, was influenced by her time spent in India (where she married a Sikh) from 1961 to 1967 and her extensive travels around the world. 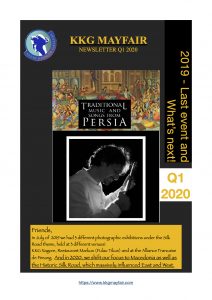